The breeding season is always eagerly anticipated to see the progeny of the first season sires and Abbey Thoroughbreds was lucky enough to welcome the birth of one of our own in early October via a lovely colt by Beneteau from the Invincible Spirit mare La Petite Coquette.

Beneteau is a son of champion sire Redoute’s Choice from a stakes-placed sister to champion filly Alinghi. Beneteau was a $1 million purchase from the 2009 Inglis Australian Easter Yearling Sale and first impressions of our Beneteau colt indicate these good looks have been passed on to the next generation. 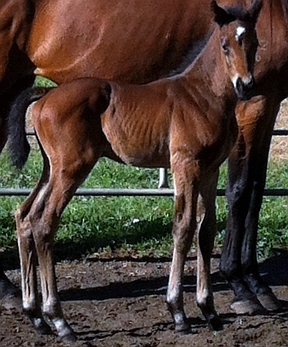 La Petite Coquette is a mare by the highly successful Irish based sire Invincible Spirit (Green Desert x Rafha). Invincible Spirit was the winner of 7 races, including the HAYDOCK SPRINT CUP (Gr.1). His offspring were on fire last season in Europe and his service fee for the new season has just increased to €65,000.

Despite being out of a Zabeel mare (Coquette), La Petite Coquette showed all the early speed of her sire, winning her first barrier trial at Muswellbrook by 4 lengths, and her next trial at Newcastle by 7 lengths. Unfortunately injury prevented her from realising her potential and she was retired from racing after only 5 starts.

Her first foal is a yearling colt by the ever consistent Beautiful Crown who will be offered for sale in 2013.

The Beneteau colt is La Petite Coquette’s second foal and we were so impressed with the foal and the potential of the sire, the mare has been served again by Beneteau this season.