With the odds of drawing the 6 winning numbers plus the Powerball sitting at 76,767,600 to 1, you can significantly reduce your odds of landing a huge payday by purchasing a yearling at the Magic Millions National Yearling Sale on the 7th and 8th of June 2016. This will make you eligible to pay up for the Magic Millions Race Series – $11.34 million in prizemoney on offer nationally including the world’s richest sales based incentive raceday which features an unprecedented $10 million in prizemoney on one day.

To give yourself an even better chance of getting hold of some of this rich money on offer – put on your shortlist Abbey Thoroughbreds Lots 1695 and 1731. These two BOB Eligible colts are both part of the Book 1 Magic Millions Gold Coast National Yearling Sale on 7-8 June 2016.

Lot 1695 (June 7) is a chestnut colt by Snippetson out of the Beautiful Crown mare Beautiful Romance.

This athletic BOBS eligible colt (pictured below) is by the proven sire Snippetson.

With in excess of 50% career winners to runners, Snippetson is not only capable of throwing stakes winners such as the recent Doomben Group 3 winner Snippets Land, he consistently has winners across Australia week in and week out.

This is the second foal for Beautiful Romance, a tough mare who won 7 races from 1100m to 1750m (including three in a row). Her first foal is deceased, but she has a weanling colt by Uncle Mo and is currently in foal to Rubick.

This Snippetson / Beautiful Romance colt has x-rays and has been scoped on 19/5/16 with no abnormalities detected (vet certificate available for inspection). 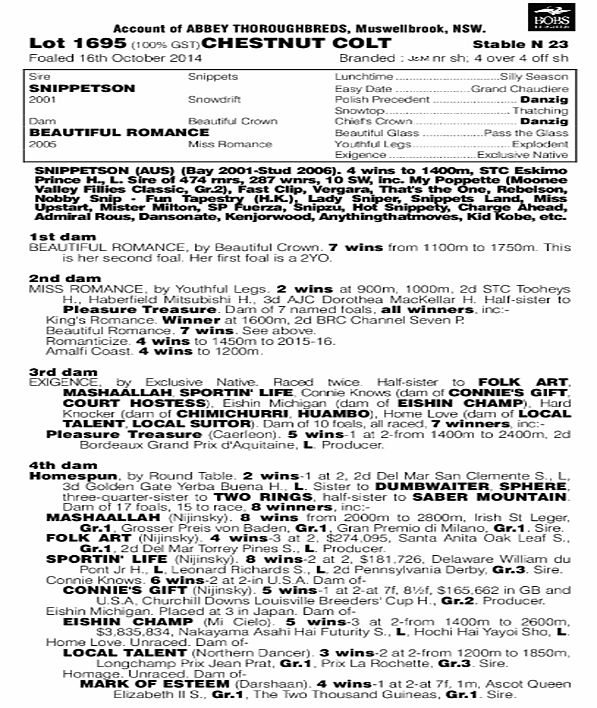 Lot 1739 (June 8) is a colt by I Am Invincible out of the Danehill Star mare Debz Reign.

After hitting the ground running as the leading first season sire by winners, earnings and stakes winners in 2013/14, I Am Invincible continues to run hot.

This outstanding colt (pictured below) looks highly likely to continue this trend. Out of the twice – winning Danehill line mare Debz Reign, he presents with good size and proportion, and will appeal to a wide range of buyers.

This is the third foal from the mare Debz Reign, who also has a 3yo filly who has been placed this season, a 2yo gelding by Trotomondo who has shown a lot of potential in his first prep, and a weanling colt by Casino Prince.

This I Am Invincible / Debz Reign colt has x-rays and has been scoped on 19/5/16 with no abnormalities detected (vet certificate available for inspection).